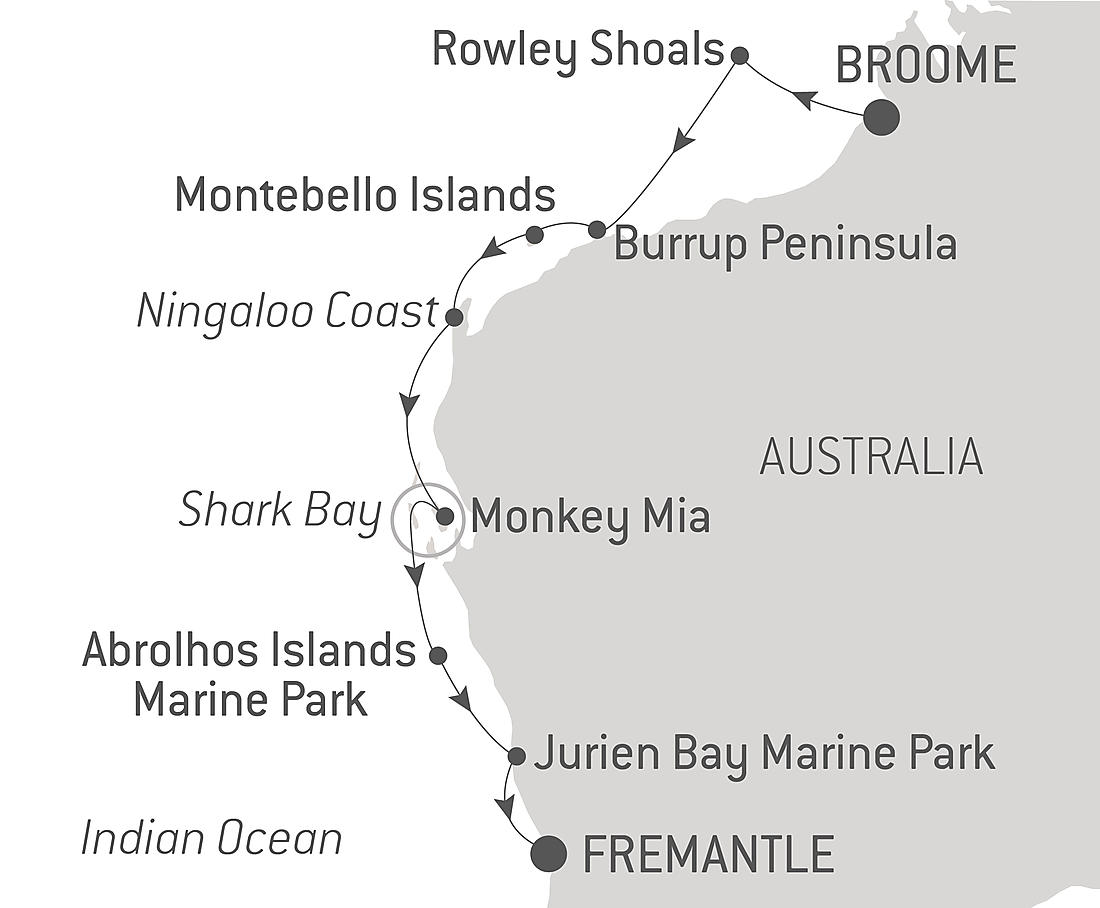 Sail along the extraordinary West Coast of Australia on this brand new 10-night itinerary on board Le Soléal. Embarking in Broome, the pearl of North Australia, you will discover the pristine beaches, turquoise waters, and World Heritage-listed scenery the region is renowned for, including remarkable encounters with marine life, unrivalled anywhere in the world.

Your first port of call will be at the Rowley Shoals Marine Park and Mermaid Reef Commonwealth Marine Reserve, together they protect a chain of three coral atolls at the edge of the continental shelf and are regarded as one of the world’s most spectacular diving and snorkelling locations.

At the Burrup Peninsula you will have the opportunity to marvel at 40,000 year old petroglyphs, depicting everything from human figures and birds, to marine life and extinct creatures, providing an insight into the ancient world of the Aboriginal people of the Pilbara and beyond. The Montebello Islands Marine Park are the remnants of an old coastal landform and have been separated from the mainland for more than 8,000 years becoming an area rich in natural marine diversity and human history.

Ningaloo Reef is the largest fringing coral reef in Australia and is an idyllic location to swim and snorkel in clear turquoise waters and immerse yourself in marine life encounters, and it sure to be a highlight of your cruise. In Monkey Mia Reserve you may get the chance to enjoy one of Australia’s best-known wildlife experiences by getting up close to wild bottlenose dolphins. You may also see dugongs, sharks, rays, turtles and a variety of fish in the water.

With its white, sandy beaches, turquoise waters, rust-red sand dunes and abundant wildlife, Shark Bay’s colourful and diverse landscapes, rare fauna and flora and world class examples of Earth’s ecological processes are what make it a truly remarkable place. Jurien Bay Marine Park and its immediate surrounds is the only major breeding area for Australian sea lions along the western coast of Australia. As well as major sea lion and seabird breeding areas, the marine park contains biological communities, populated with a mix of temperate and tropical plants and animals, courtesy of the Leeuwin Current.

You will disembark in the vibrant city of Fremantle, where the old blends with the new, creating an enriching cultural experience.

Located in the northwest of the Kimberley region and in the far north of Western Australia, the town of Broome is reputed for its history and its glorious pearling era. The fascinating Chinatown district, which is the historic city centre, and the famous Japanese Cemetery, dates back to 1896, and has a past marked by the immigration of numerous Chinese and Japanese workers, attracted by the prosperous pearl industry at the end of the 19th century and at the beginning of the 20th century. Broome is also famous for the “Staircase to the Moon”, an optical illusion created by the Moon reflecting on the sand banks at low tide, like a staircase climbing up towards the sky, a unique spectacle provided by nature… 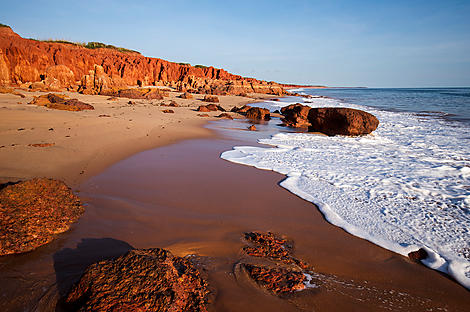 Regarded as one of the world’s most spectacular diving and snorkelling locations, the Rowley Shoals lie 260 kilometres west of Broome in the Timor Sea. The three coral atolls of Mermaid, Clerke and Imperieuse reefs rise, near vertical, from the surrounding crystal-clear waters on the edge of the continental shelf. The shallow lagoons inhabited by a diverse array of corals and abundant marine life are ideal for exploration by snorkellers and divers. To take full advantage of the location, your ship will spend one and a half days at the Rowley Shoals, allowing you to swim and snorkel from Zodiac®. 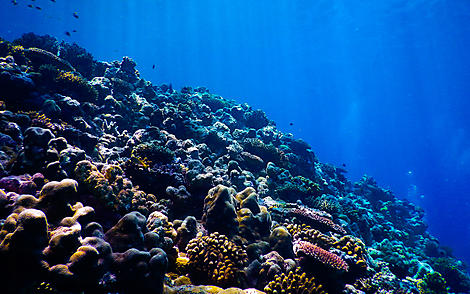 Murujuga National Park and the islands of the Dampier Archipelago showcase what is thought to be the highest concentration of rock engravings of any known site in the world. Aboriginal people have been living there for more than 50,000 years and the petroglyphs (rock engravings) have been estimated to be as old as 40,000 years. The petroglyphs are diverse, depicting a record of what was meaningful to the Aboriginal people of the Pilbara and beyond. The sacred rock art’s traditional custodians are the Ngarluma-Yindjibarndi, the Yaburara-Mardudhunera and the Woon-goo-tt-oo and you will have the opportunity to visit Deep Gorge with a traditional custodian guide and marvel at the petroglyphs up close. 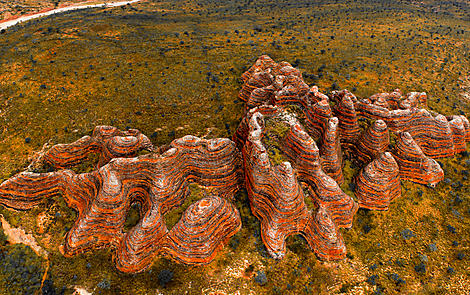 Located off the Pilbara Coast 120km west of Dampier, the Montebello Islands Marine Park covers more than 58,000 hectares of ocean and over 250 low-lying limestone islands and islets. The flat limestone islands range in size from Hermite, the largest, at about 1,000 ha, to several small islets and rocks of less than one hectare. They are the remnants of an old coastal landform and have been separated from the mainland for more than 8,000 years. They were named by the French navigator Nicolas Baudin in 1801 after the battle of Montebello. The area is rich in natural marine diversity and human history. They achieved international notoriety in 1952 when the British, in an operation code named Hurricane, detonated an atomic weapon in a bay off Trimouille island. Two further atomic tests were carried out in May and June of 1956 on Alpha and Trimouille Islands. You will have the opportunity to explore the marine park with our fleet of Zodiacs®. 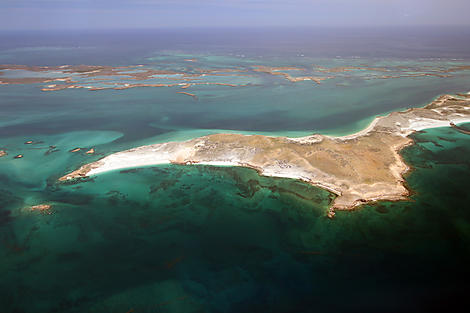 The Ningaloo Coast Marine Park is a place of spectacular contrast between lush and colourful scenery beneath the surface of the Indian Ocean and the rugged, arid landscape of Cape Range National Park. Here is also one of few places on Earth where you can see the biggest fish in the ocean - the whale shark. Our voyage will occur during the peak viewing season, maximising our opportunity to encounter these amazing giants of the sea. We will also have the opportunity to swim and snorkel on the largest fringing coral reef in Australia and the only large reef in the world found so close to a continental land mass, making it an easy snorkel from shore. 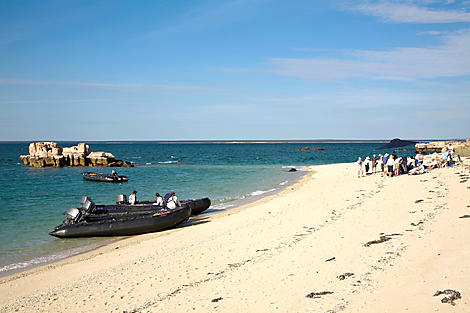 Over 70% of the Shark Bay World Heritage Area is marine environments and many of the reasons for its World Heritage listing are within these waters. The shallow and mostly protected bays host over 10,000 dugongs; the world’s largest seagrass beds; and representatives of the earth’s oldest lifeforms, stromatolites. Wild bottlenose dolphins visit the shore at Monkey Mia Reserve, creating one of Australia's best-known wildlife experiences. You may also see sharks, rays, turtles and a variety of fish in the water. You will have the opportunity to experience the wild bottlenose dolphins early in the morning before exploring the area’s natural and cultural history along the Wulyibidi Yaninyina trail. 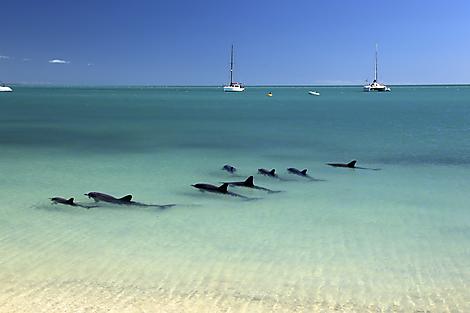 With its white, sandy beaches, turquoise waters, rust-red sand dunes and abundant wildlife, Shark Bay became Western Australia’s first Wold Heritage listed area in 1991. The colourful and diverse landscapes, rare fauna and flora and world class examples of Earth’s ecological processes are what qualify Shark Bay for World Heritage listing – making it a truly remarkable place. You will have the opportunity to sail past the location of the first recorded European landing on Australia’s west coast at Cape Inscription where in 1616 Dirk Hartog left evidence of his landing in the form of a pewter plate inscribed with details of his journey. 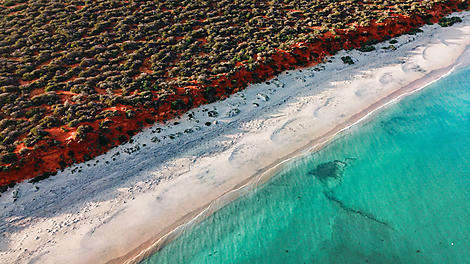 The Abrolhos Islands Maine Park consists of three main clusters of islands that stretch from north to south across 100 kilometres of ocean, and includes the Wallabi Group, Easter Group and Pelsaert Group. Established as a marine park in 1983, the waters of the Abrolhos are famous for colourful coral, crystal clear waters and large breeding colonies of seabirds. Here, the southward flowing Leeuwin current has created a meeting place for tropical and temperate sea life. In July 2019 the Islands were declared a national park for their ecological and historical significance. You will have the opportunity to explore East Wallabi Island and its fringing reefs.

Jurien Bay Marine Park located 150 kilometres north of Perth, was named by Captain Nicolas Baudin aboard the Géographe in honour of the French naval administrator Charles Marie Vicomte Jurien. The marine park surrounds dozens of ecologically important islands that contain rare and endangered animals found nowhere else in the world. The marine park and its immediate surrounds is the only major breeding area for Australian sea lions along the western coast of Australia. It is also a primary breeding ground for seabirds and is populated with a mix of temperate and tropical plants and animals, courtesy of the Leeuwin Current. 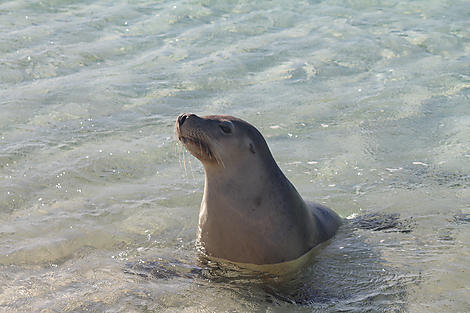 The vibrant city of Fremantle blends the old with the new, creating an enriching cultural experience. Maritime, convict and colonial history can be explored in one of the best-preserved examples of a 19th century port streetscape on Earth, while buzzing markets, lively bars and casual street cafés give you a taste of 21st century life with the locals. If you're hitting the heritage trail, be sure to include a visit to the Western Australian Maritime Museum, World Heritage listed Fremantle Prison and Western Australia's oldest public building, the Roundhouse. 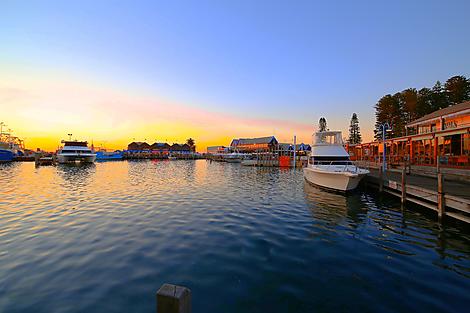